The hazelnut industry in Oregon has turned into a “big tree” from such a little nut, especially with the realization of the state-of-the-art Hazelnut Growers of Oregon processing plant near Aurora Oregon, completed in 2018. While the Willamette Valley in Oregon grows around 99% of hazelnuts in the United States, HGO handles approximately 18% of Oregon’s hazelnuts.

Hazel has been native in the British Isles for 8,000 to 11,000 years. It became the predominant forest tree after the last ice age and was eventually superseded by the beech tree. As well as being an important food source, hazel trees and nuts figure significantly in the lore of Scotland, Ireland, and England. Hazelnuts were grown there for large-scale production until the early 1900s. Cultivated varieties, known as cobnuts, are still grown in Kent, but Great Britain now imports most of its hazelnuts. 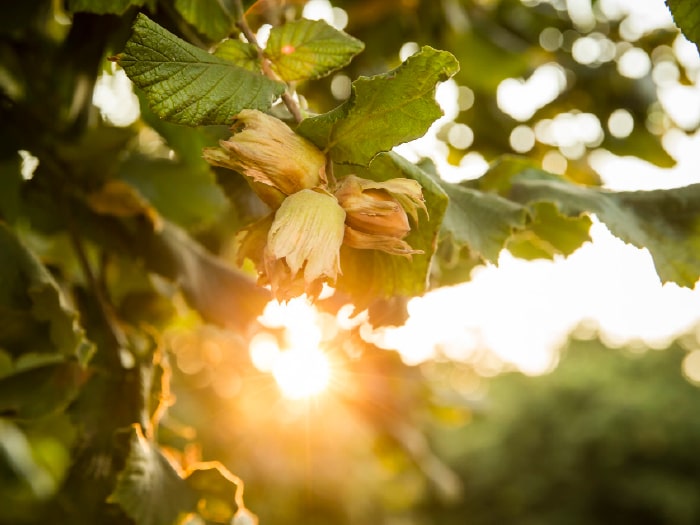 There are records of hazelnuts from the ancient Greeks and Romans. According to Pliny, hazelnuts came from Damascus and were gathered for food. Damascus, a city in Syria, has been continuously inhabited since at least 8000 BCE. The area is humid, 800 meters above sea level, and has rich basaltic soil, seemingly ideal for growing hazel. Similarly, records of hazelnut shells in middens (kitchen compost piles) in Germany, Scandinavia, and Scotland date back to the Stone Age of 6,000 BCE.

Excavations in China uncovered hazelnut shells from pre-history, indicating that the nuts are one of the five sacred foods of that time. China is now the most prominent importer of Oregon Hazelnuts, and in-shell nuts are the most popular there. Hazelnuts are a traditional treat for Chinese New Year, as well as for gift items during that season, hearkening back to the hazelnut as a sacred food in that culture. They indicate luxury to middle-class Chinese people.

In contrast, in the Middle Ages in Europe, hazelnuts were considered food for peasants, while almonds were reserved for the wealthy. In modern times, hazelnuts are competing with almonds as the favored nut. Today, Italy, the world’s top consumer of hazelnuts, eats 78,000 metric tons per year. Second-ranked Turkey consumes 60,000 MT while fifth-ranked, the United States currently consumes 15,284 MT per year. 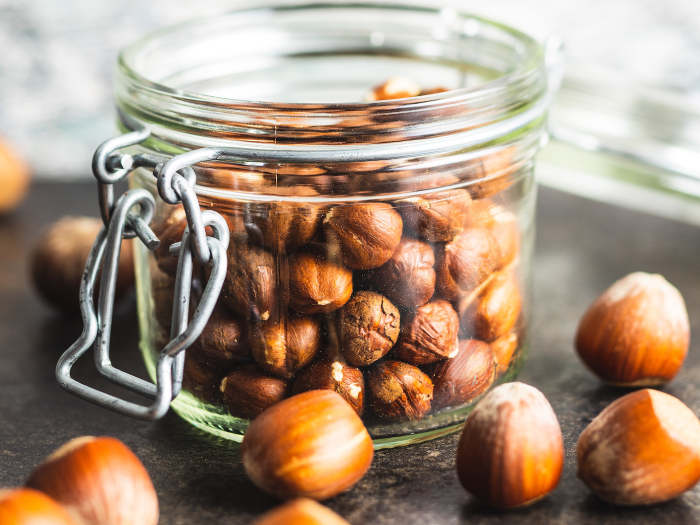 Hazelnuts were ancient symbols of wisdom, good luck, and fertility. With the rise of Christianity in Europe, they were given new Christian meanings and remain a customary part of Christmas traditions and holiday foods, especially in German cookies and pastries, and chocolate confections. Recipes for a myriad of German Hazelnut Cookies and confections for Christmas can be found in the cookbook, Oregon Hazelnut Country, and on the internet.

Hazel trees, specifically Corylus cornuta or “beaked hazelnut” and Corylus americana, have supplied indigenous people in the Pacific Northwest and California, as well as in eastern US woodlands as a food source, and for basketry and arrow shafts, since the glacial age. The area in Washington State known as Tukwila, where the native Duwamish tribe lived, translates to “land of the hazelnut.” 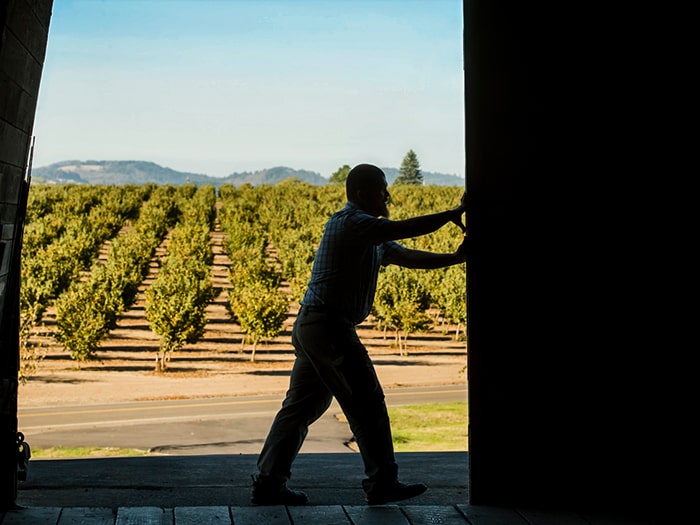 Hazel is one of many European plants that were brought to the New World by immigrants. Robert Prince established the first American commercial nursery in Flushing, New York in 1737 where Barcelona, as well as American, hazel trees were available for sale. The first cultivated hazel in Oregon was planted by Sam Strickland, an English sailor who retired from the Hudson’s Bay Company, in Scottsburg, Oregon in 1858. George Dorris planted the first commercial hazelnut orchard in 1903, planting 200 Barcelona trees on five acres in Springfield, Oregon. Barcelona is a European variety of Corylus avellana, originating from Spain, and is still the most widely cultivated variety in the Pacific Northwest, accounting for about 60% of Oregon hazelnut acreage.

Dorris’s dream was that Oregon would one day become the hazelnut capital of America, and his dream has been realized. Today, the Dorris Ranch is a living history working farm. Knight Pearcy and Ferd Groner were early believers that Oregon’s “mistland” climate favored cultivation of the hazelnut. By 2010, Americans consumed about 20 million pounds of hazelnuts annually. That number has risen to more than 33 million pounds and is growing as hazelnuts become more available to consumers across the nation, and with more awareness of the nutritional value and exceptional flavor of hazelnuts. 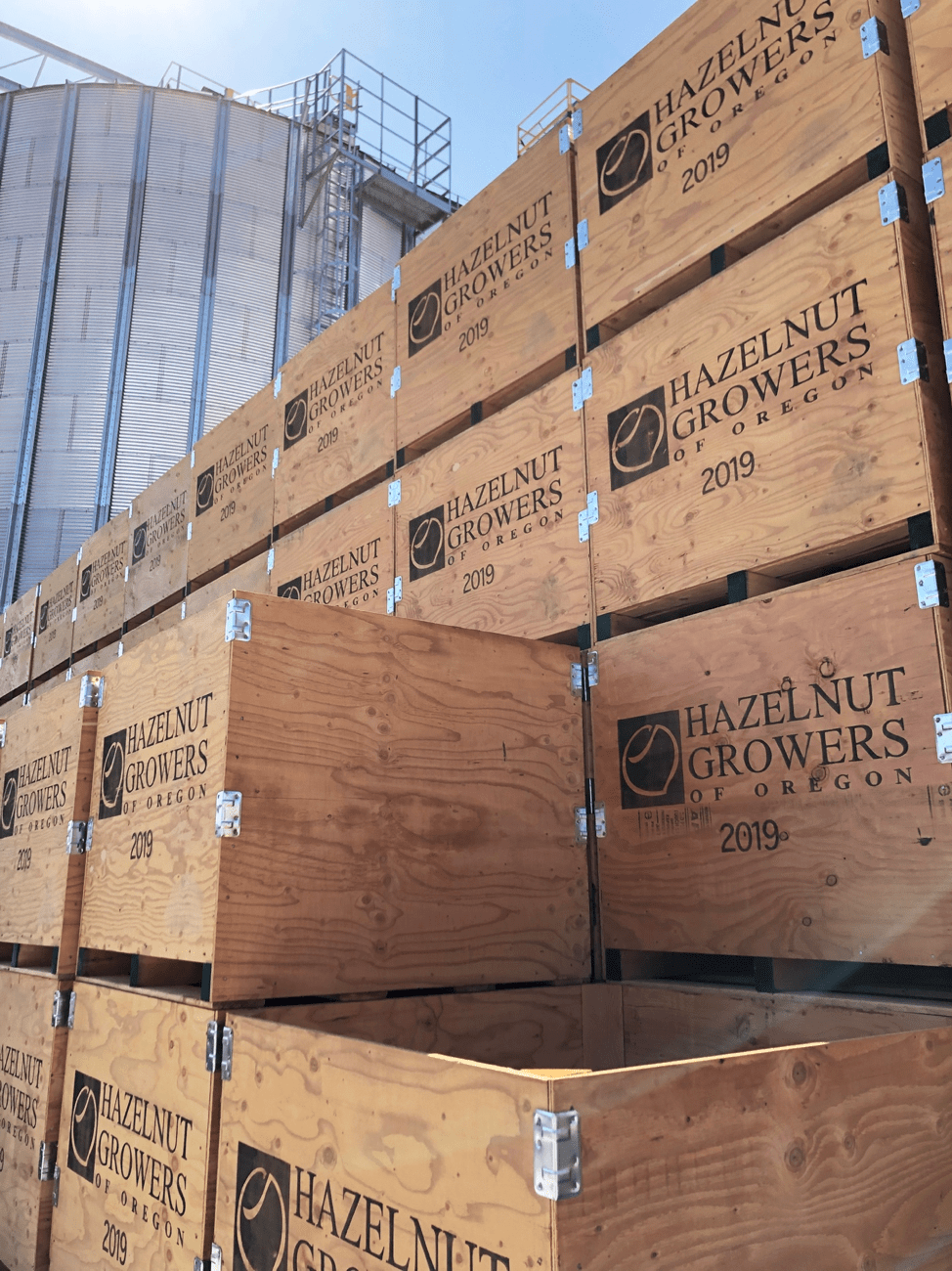 The grower cooperative, Hazelnut Growers of Oregon or HGO, was established in 1983 and merged with Wilco Farmers Cooperative in 2016. The new state-of-the-art plant opened near Donald, Oregon in the summer of 2018, offering diverse services to growers, capacity to handle the exponential crop yields that have come about as more acres are put into hazel trees and more trees mature, and a high-performance team for growing the hazelnut industry through production, marketing, and value-added products.

Today, Turkey produces more than 70% of the world’s hazelnuts, while Italy is the second largest producer of hazelnuts in the world. While the USA, and particularly Oregon, comes in third for producing hazelnuts, it is widely held that the best hazelnuts in the world, with superior flavor and texture, are grown in Oregon with our perfect climate and soil conditions. With Americans’ growing consciousness toward healthy eating, and improved marketing strategies, hazelnuts are becoming more prominent as a time-tested tasty, and top-quality food for holiday fare and everyday nutrition, with a deep heritage lasting through millennia in cultures worldwide.